The Tahoe RCD is committed to aquatic invasive species (AIS) control projects within Lake Tahoe along with our many public and private partners. Since 2005, we have worked with our partners to assess and prioritize AIS control projects. We have participated in over 20 projects to control the spread of Eurasian watermilfoil, curlyleaf pondweed, Asian clams and warm water fish.

The following are our current projects: 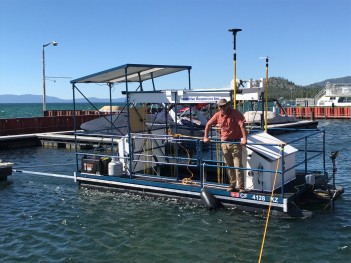 Tahoe RCD in collaboration with Inventive Resources, Inc., are embarking on a project using ultraviolet light in Lake Tahoe to kill aquatic invasive plants.  This initiative is possible thanks to a grant for project implementation from the California Tahoe Conservancy and seed funding from the Tahoe Fund. New research shows that ultraviolet-C (UVC) light could be an effective method to eliminate aquatic invasive plants.  UVC light works by damaging the DNA and cellular structure of invasive plant life that currently threaten the health of the Lake.  While this technology needs to have further field testing to determine its full potential, Ultra-violet light could augment the currently available methods Tahoe RCD already uses especially in low water years, in tight spaces within marinas, or in river systems. Additional in-kind support for the project will be provided by the Lakeside Park Association. 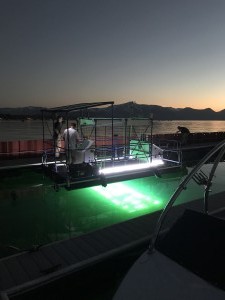 From our efforts in Emerald Bay, we know that invasive plant populations can be reduced, and with continued treatments and new tools, we will be better able to manage populations around the lake in the future. This technology is being brought to the forefront by John Paoluccio, President of Inventive Resources, Inc. A project using UV light to reduce aquatic plant infestations has been very successful in the laboratory. Our goal is that UV-C light will be a successful tool to control aquatic invasive plants in Tahoe and other waterways. This project started in June 2017 and will be completed by December 2018. The project consists of monitoring the effectiveness of the technology as well as any potential effects to water quality and biological resources.

Beginning in 2005, the Tahoe RCD has been directly involved with aquatic invasive weed control projects. We have treated over 30 acres of invasive weeds throughout Lake Tahoe including Emerald Bay, Lakeside Marina and the Truckee River. 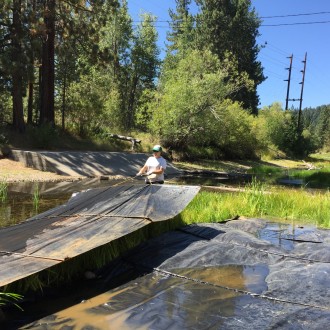 The Tahoe RCD is pioneering a project on the Truckee River to control the aquatic invasive plant, Eurasian watermifoil, which has been growing prolifically there since the late 1990s. Made possible by strong partnerships, this project follows other successful removal projects that have targeted aquatic invasive plants in Lake Tahoe, particularly in Emerald Bay. Eurasian watermilfoil likely entered the Truckee River during the overflow of the dam in 1997, and has established a thriving over the last 5-7 years. The goals of this project are to, create a baseline map of the infestation from the outlet at Lake Tahoe downstream to River Ranch at Alpine Meadows Rd, and systematically implement control efforts to remove this aquatic invasive plant within this reach of the Truckee River.

The map below shows the project area. Click on the green squares for aerial video. 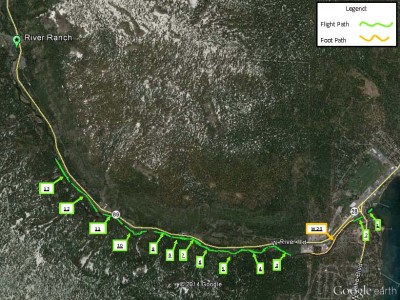 Asian clam control in Lake Tahoe is a multi-agency, collaborative effort. Starting with a pilot project in Marla Bay and off shore of Lakeside Beach, researchers and managers looked at two different methods of control; rubber bottom barriers and diver assisted suction removal. Initial tests in the southeast portion of the Lake showed that covering clam populations with rubber barriers was effective in starving clams of dissolved oxygen, thus killing them. Expanding on these initial tests, in the Autumn of 2012, approximately five acres of rubber barrier material was deployed on a relatively low density clam population in the mouth of Emerald Bay. The perimeter of the barriers can be seen below (click photo to enlarge): 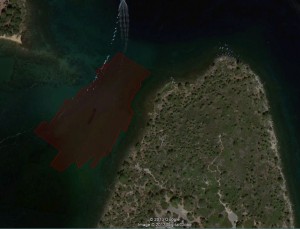 Researchers actively monitored clam mortality and dissolved oxygen levels beneath the barriers and were hopeful to achieve a high percentage of clam mortality. In 2014, the barriers were moved to cover the additional 1/2 acre population. In Winter 2014, all rubber barriers were removed and alternative methods of control will be assessed.

Since 2010, the Tahoe Regional Planning Agency, with assistance from the Tahoe RCD conducts veliger monitoring in Lake Tahoe, Echo Lake and Fallen Leaf Lake. Veligers  are the larval stage of bivalve mollusks which includes quagga and zebra mussels, two potential invaders of Lake Tahoe. Monitoring is an essential element to ensure that the Watercraft Inspection Program has been effective in preventing quagga and zebra mussels from establishing populations in Lake Tahoe. Ten locations are surveyed monthly from late June until the end of September; eight locations in Lake Tahoe include Elks Point, Tahoe Keys, Emerald Bay, Meeks Bay, North Tahoe Marina, Sand Harbor, Obexers Marina, and Cave Rock along with Fallen Leaf Lake and Echo Lake. Sampling consists of eight vertical plankton tows at each site. The samples are then sent to a laboratory to be analyzed. All of the samples to date have returned with no zebra or quagga mussel veligers present.